One Technique On How To Combine Lotto Numbers

on May 21, 2012
Here's one strategy on how I combine lotto numbers. It's not perfect yet but, at least, it gives me an idea where the numbers may come from. The technique is to eliminate the numbers with lower probability so that what remain are fewer numbers to choose from.

For lotto 6/55, for example, we know that there are more than 28 million combinations. To choose what's perfect for a jackpot is worse than finding a needle in a haystack. Moreover, to pick 6 numbers out of 55 can lead you to a dead end. Due to the many possible choices that you can make, you simply can't make a choice.

To make your job easier, to zero in on the numbers that may likely win can be one good strategy; i.e. if you can isolate these numbers. To try how possible it is, I came up with this method. Like I said earlier, it's not perfect. However, if you look at a bigger picture, I consider approach promising. Here's how to do it.

To give you an idea on how your lotto tally sheet should look like, below is a visual image. Data contained therein are based on Lotto 6/55 results from March 12 to May 7, 2012. The lotto numbers individually boxed in yellow-gold are the result of the May 9 lotto drawing.

To make things easier for you to tally and group the numbers, use the tool Lotto 6/nn Statistics or the Lotto Trends Calculator which you can download at the download site.

Is it possible to determine where winning numbers might come from?

Upon analyzing thousands of results, winning numbers usually come from certain areas. I defined these areas as follows: 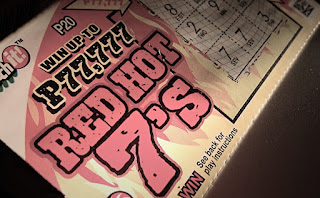 This is a study on how you can fairly win or unfairly lose from playing scratch-off cards. To win is not the same as to earn or profit. You may win a single card but you still lose a big amount of money.

As guinea pig or subject of the study is the Red Hot 7s scratch-it card game being sold by PCSO. At the end of the series, we may be able to theoretically conclude the possibility or probability of winning or losing from playing any scratch-off card games. As a result, this will guide you whether you should continue or not playing any scratch-off game cards.

If you want to find out how many cards should you buy to win, go directly to the end of this post.

How To Play Red Hot 7 ScratchersThere are 9 squares on a Red Hot 7 card arranged 3x3, similar to a tic-tac-toe. If you match all sevens in a column or row or diagonal, you win a specific amount of money. The price money ranges from ₱20 to – ₱77,777 depending on the row or column that you matched. If you matched the diagonal column, yo…

Here's a list of Philippine Lotto 6/42 results in the year 1995, the year Philippine lotto started.

Are your favorite numbers listed here? If they are, might as well form a new combination. Based on statistics, the jackpot numbers below are unlikely to be drawn again. Any combination of 5 or 4 numbers from any result drawn are also unlikely to win again. Any 5 from the 6-number jackpot can recur only twice, a probability of 1.15%. Any 4 from the 6-number jackpot can recur also with a probability of 0.87%.